There was a list of optional attachments, and pull behind attachments,that i'm currently working on.

Headlights and tail lights, could be ordered on all models. They were standard on the 145 and 165. They could be bought at dealer for the smaller tractor. Front loaders and backhoes only came with the 145 and 165. There was sleeve hitches for both gear drive and hydro models as well.

There was even a front mounted electric generator. I am working on getting literature, with all the options and attachments dealers had. Bad thing is so many attachments were interchangeable . So you could put a 50" cut on a 10hp, which i don't recommend. OR, you could put a front loader on a 125, which i don't recommend. Jacobsen built them for streamlining, easier to produce down the assembly line. So there is stuff out there that who knows what came on it from the dealer? My daddy bought this way, Or my uncle ordered it that way. So unless you show the sales receipt, everything was interchangeable, and the fish story grows. Not saying the dealer wouldnt sell you what you wanted either. Paper work is the key. Because whos to say Uncle Bob didnt see a Ford in the weeds  and  did some part swapping? LOL dont get mad  people, i heard it all before.

My favorite is when a customer tells me he has a LGT 100 with a hydro. GRANDPAP ordered it new. Someone swapped a hood. LOL. Unless the dealer did some shady stuff. lol

There was a lot of options back then, and you could order anything you wanted basically, but i dont know everything, just what the papers i find tell me. 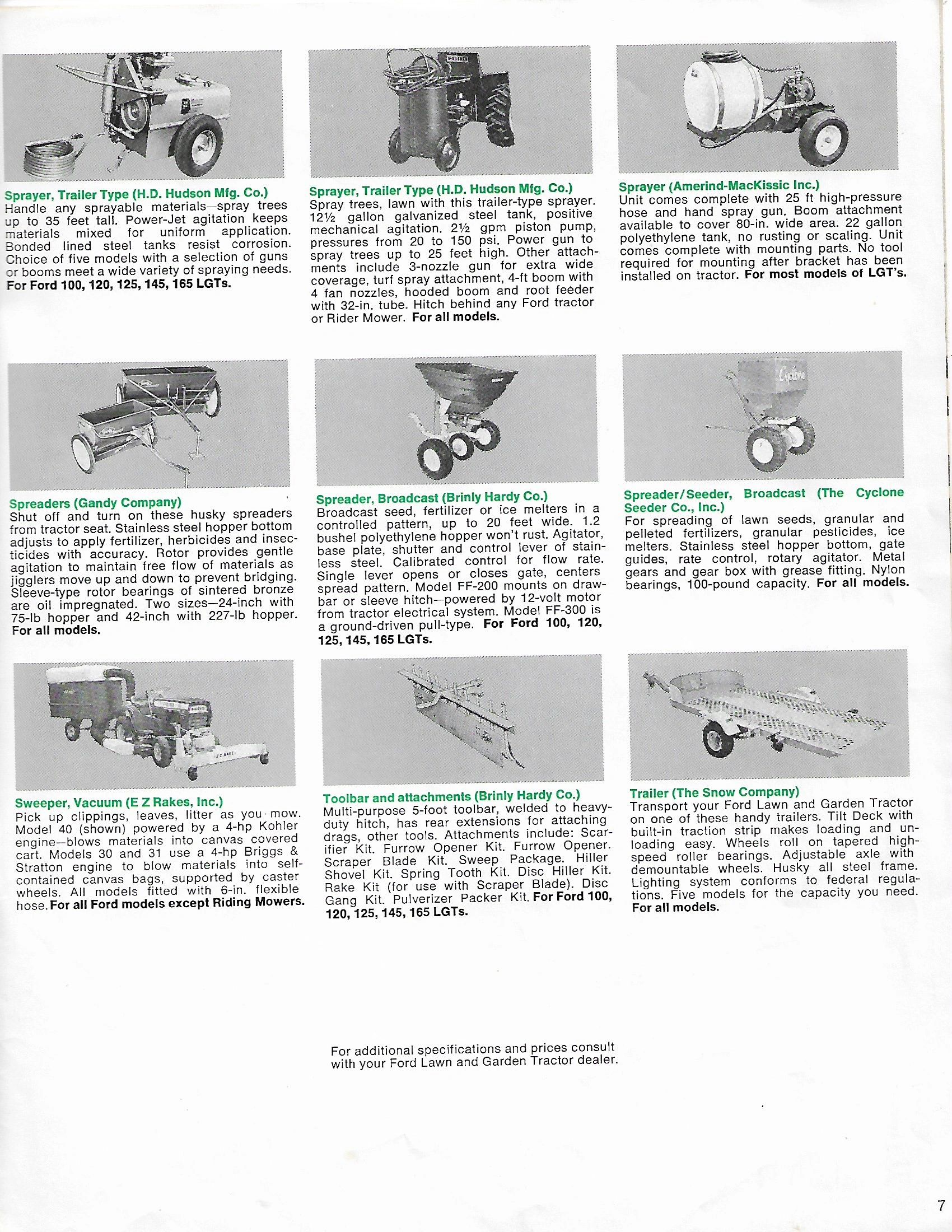 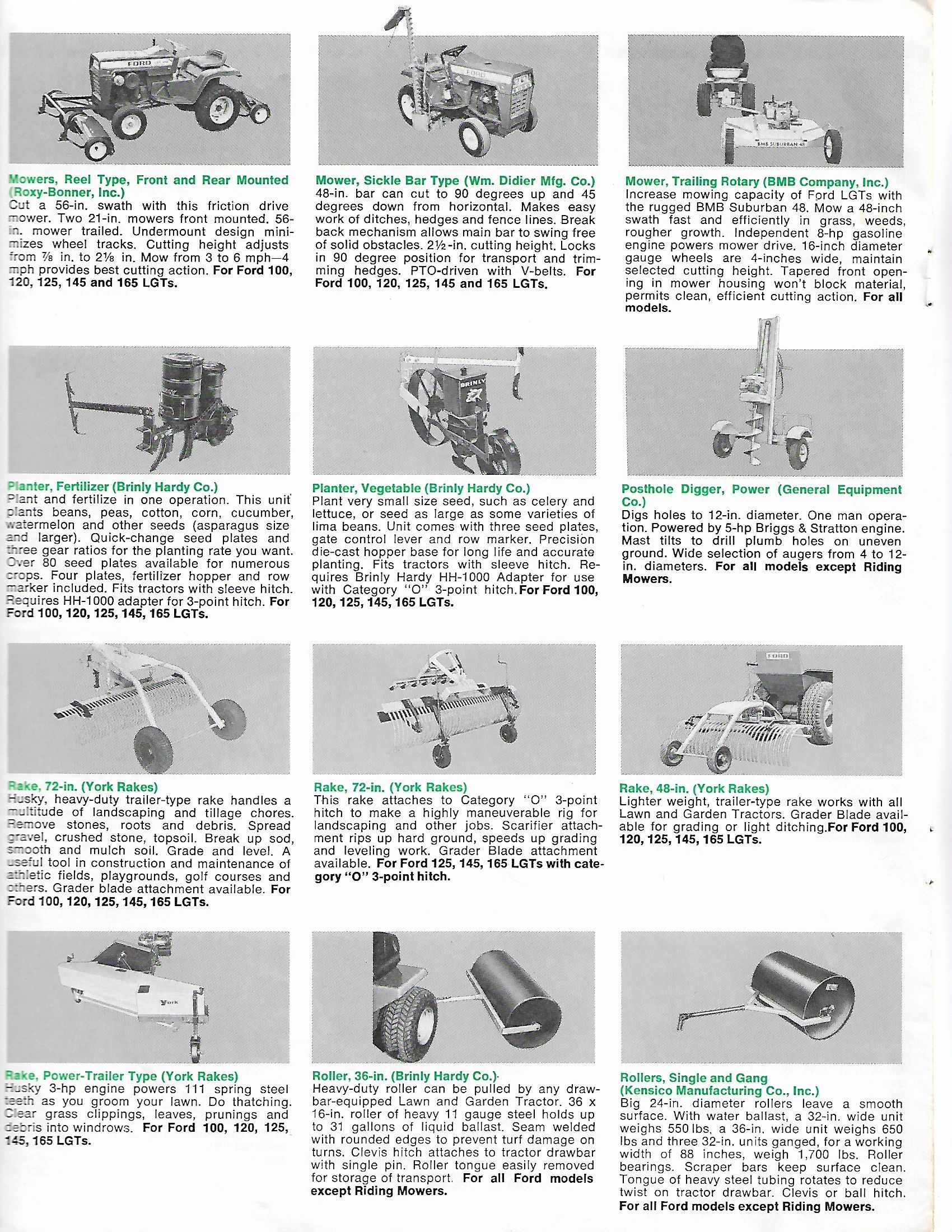 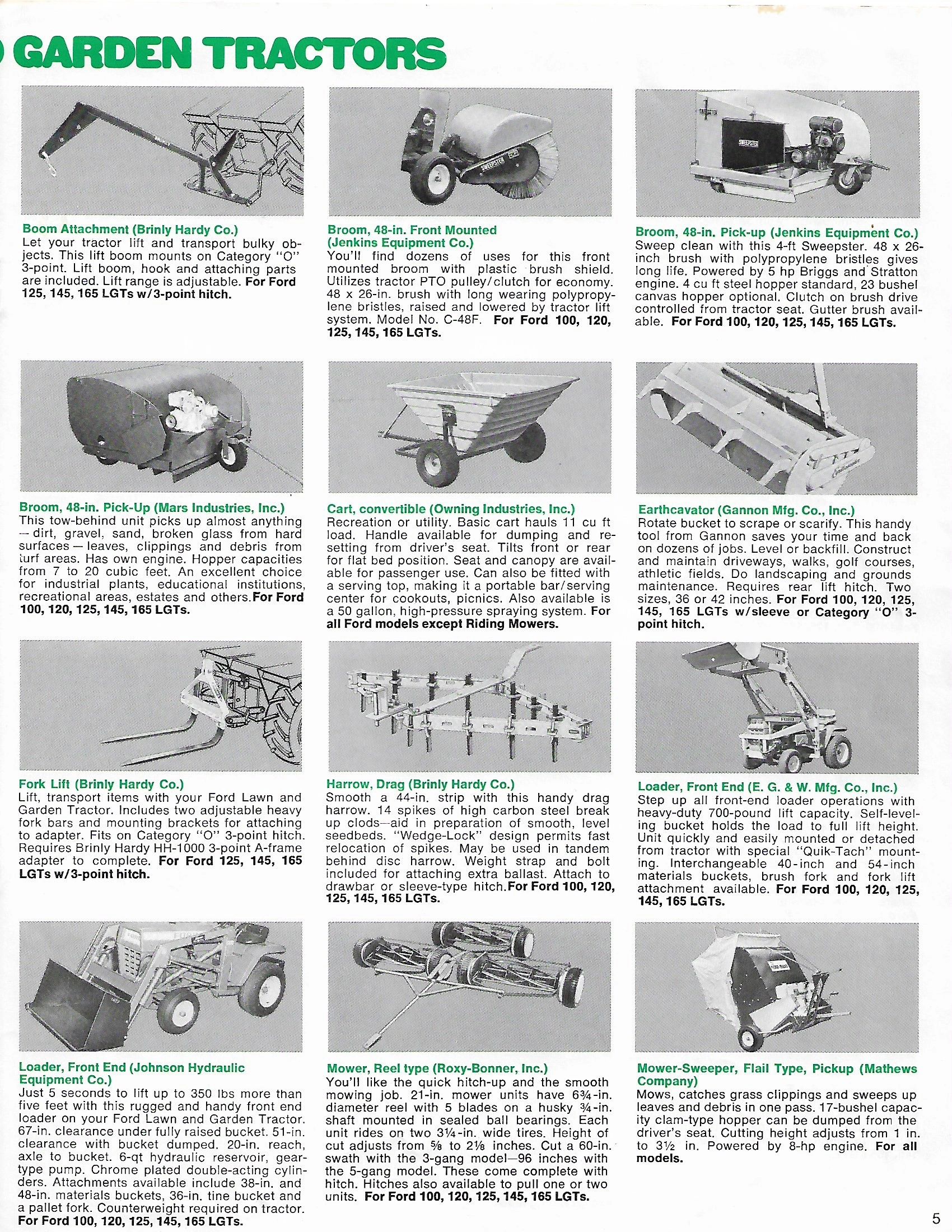 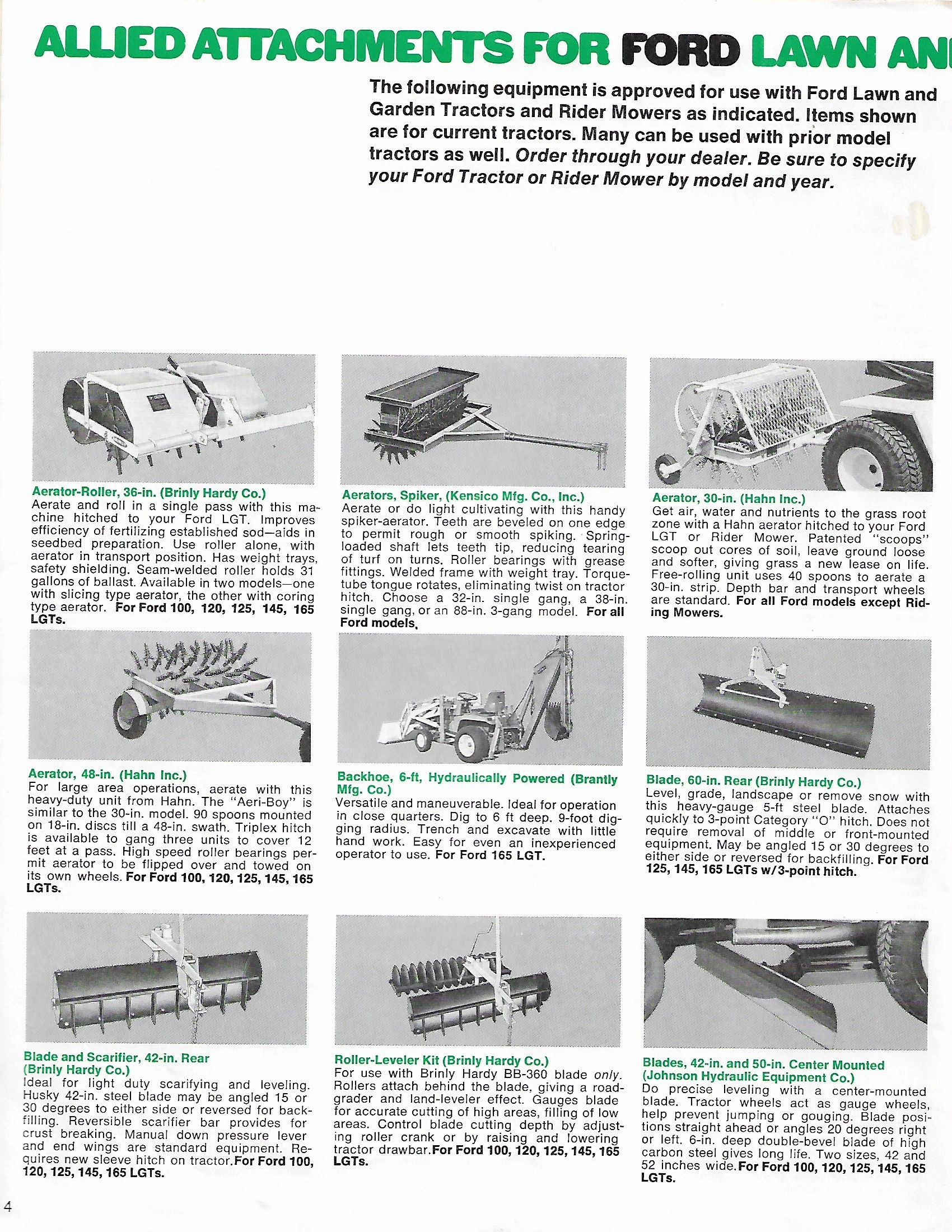 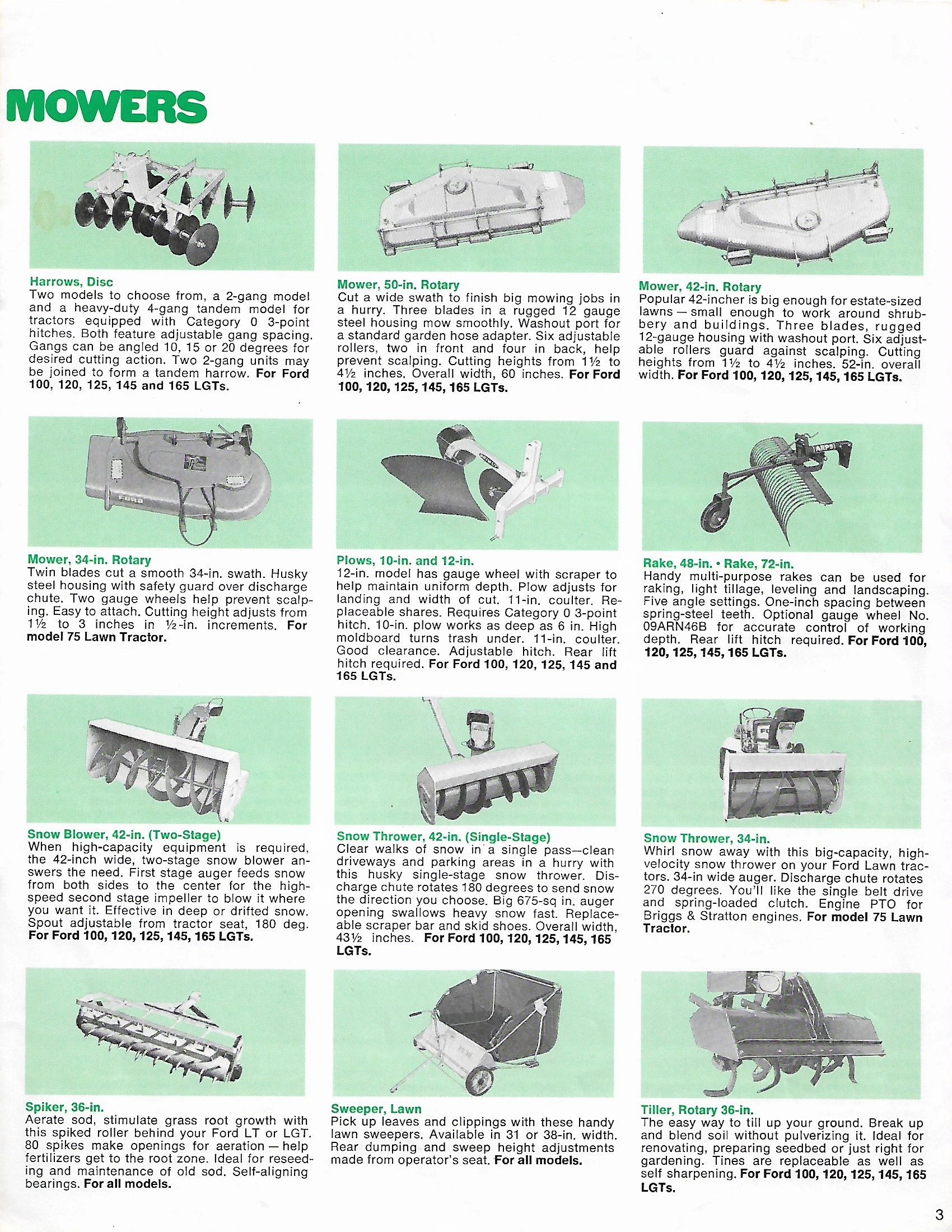 14 hp Kohler, Hydro, with Electric over hydraulic lift. Ring gear electric starter, no generators on the 140!

Why is it an odd ball, well its the only T800 that we know of with the HI/LOW and a FORD MOTOR COMPANY, ID Tag for the HI/LOW. All "T" tractors known today have Jacobsen Badges.

What is the Hi/Low?

A dual pulley reduction drive, that works like a hi and low range, or a creeper as in Cub Cadet lingo. Notice the FoMoCo tag.

2 pulleys that run on one shaft, with a lever that locks one into place. Allowing the other to rotate around a "Sun gear" planetary system. Pure Engineering genius.

We are working on getting more and more Information on this set up. Not all T tractors came with this system

How many was there?

A lil Help from my friends

I cannot do this alone, there is so much information out there. I do the website, but all my tractor comrades keep me straight. So this is a shout out to say thanks.

So in 1964 Ford wanted to get into the lawn mowing business. So they went to Jacobsen. Now Ford really did not want to invest in the market fully. They sort of wanted to test the waters. So they ordered roughly 800 tractors in blue, but left the Ford name off. So in 1965 Jacobsen unveiled the Blue JACOBSEN T 800 AND T1000, line of garden tractors. Ford wanted to make sure this did not flop. Well you guessed it, it was a huge success. So successful that a lot of people to this day , do not know Ford garden tractors, had anything to do with Jacobsen. They just know them as " Hey that tractor looks like a FORD".

This guy is my go to for any "T" tractor related questions i have. So i thank you.

The gentlemen who has, been there since the beginning to help me along the way. Thanks

All this information, is shared, from someone's personal collection. From years of research, buying and selling,  turning wrenches, and hunting. So i may know a lot about 72-83 tube frames. But these 2 have been specializing in the angle frames, for  along time. I guess I'm late to the game, better late than never. Not everyone knows everything. Some people may not like us, or what we have to say. But these guys were willing to share  and not be greedy for the good of the hobby.So this i applaud them.